I've seen a few blogs on this site and it's about student's dogs. I thought, hey, I also have a dog. Maybe I should talk about him, so here I am. My dogs name is Milo and he is a 5 pound Yorkie Mi-Ki mix. He was born on October 13th 2012, making him 6 years old now. The day I got him, my mom and dad told me, "hey, lets go pick out some Christmas lights" since it was December of 2012 when we got him. 10 year old me jumped in the car all excited. We drive downtown past Toby and pull into a weird spot I've never been to before. I get out of the car very confused and my parents lead me to a small house where I hear a LOT of barking. We walk in and we see so many little Pomeranian puppies crying and whimpering at us to pet them. Still confused on why we were here, I didn't even question it because of the amount of dogs around me. The owner of the house leads us to her living room, where there is 3 Yorkie mix puppies sleeping peacefully in a crate with their mom. The lady grabs the smallest and lightest puppy out of all of them and hands him to my mom. He is the runt of the litter. My mom hands the dog to me and said "do you like him?" I replied, "of course I do!" and then she tells me "good, because he's yours." At this point I'm bawling my eyes out in joy. We lost out Airedale not long before so I missed having a puppy. Fast forward a few weeks later, we get to bring him home and we all decide on the perfect name, Milo.

Posted by Emma Fitzgerald at 5:58 AM No comments:

My Love for Digital Art

I have always loved digital art. Making art on a computer has always been a huge hobby of mine. Spending hours just sitting there in front of a screen and letting your own imagination take over you as you're creating another art piece has been a way for me to destress for years now. However I would always alternate between different outlets when it came to making art. My first start was with 3D modeling. I had this free program on my old laptop called Blender that allowed you to make 3D models of anything and even make animations. I would follow along video tutorials and learn how to make basic things like a teddy bear and pool balls

These are the small projects I made. I made these in the middle of 2015.

I then went to video editing. My whole love for video editing came from my eighth grade Graphic Art class. Although I had one in seventh grade, this one was more based on filming and editing, and I loved it. We would make silly sketches, a fake commercial, and even a silent film. One of my favorite projects was that we had a script from lines from It's a Wonderful Life, and we were supposed to practice different camera techniques while saying the lines. Then, we would create our own ending with the information given to us via the script. I looked forward to every class wondering how we would film our video and edit it too.

Today, I take Graphic Design for my first semester. My favorite assignment we did so far was make geometric portraits out of animals using a photoshop-like program. I loved doing it so much that I even started to make some of my own.

This is the one I made for class, it's a red panda.

And this is the one I made by myself for fun, it's a corgi dog.
Posted by Eliza Wambolt at 3:24 PM No comments:

The Works of Angel Olsen

As of late, I have been listening to a lot of music by the artist Angel Olsen. She is an independent rock artist, who got her start in the late 2000's, with an EP called Strange Cacti, and has been refining her sound ever since she started out. She really came into her own with her first full LP album release of Half Way Home, where she solidified a sound that mixed rock, and 60's pop. Her whaling voice was something that could be heard in a small town country girl singer in the early 1960's, which made her stand out from most artists around the time that were going for a similar sound. The 60's influence was also quite strong in her songwriting, which is very delicate and emotional, but very strong and influential. With her next record Burn Your Fire for No Witness, she made something louder, stronger, but kept her delicate songwriting. However the overall sound was becoming bolder, in terms of lyrics, and noise: Like a cross between Fleetwood Mac and The Crystals. However, it wasn't until her latest studio record My Woman (which is my personal favorite) that she really put her heart on her sleeve and made something that had never been heard before. She took all of the influences of her past, and all of her current influences, and made a record unlike anything heard before; A sonic masterpiece of clever, and heartbreaking songwriting. It had a perfect mix of electric and acoustic instruments, and allowed for untamed creative freedom to make something of her own. She is quite possibly one of my favorite artists of all time, because she knows how to be human, and how to make music to inspire. 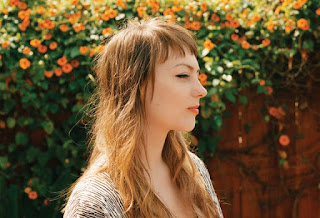 Posted by Colby Flanigan at 9:08 AM No comments: