In ten years, I hope that I am doing something I love, or working towards doing something I love. Living a life doing something I don't like is my worst fear, so I hope I found something that I absolutely love. I want to have no college debt, which is kind of a stretch, but if I am doing something I love, hopefully that wont be an issue. I want to have gone to new places and done new things. As I am still going to be young during this time, I hope that I took the opportunity to do new things that I may not be able to while having a full time job. I want to remain a gold scholar in my class, because I have done it so far, and I think I can remain top in my class during senior year. I want to be someone I can look up to. This means that I will have taken advantages of opportunities and lived life to the fullest. I want to have done things that push me to be a better person, whether that is education, living alone, or a difficult experience, because I know it will help me to grow into someone who I would be proud of. I want to be able to swim, because currently I am not the strongest swimmer and I think it could come in handy. I also want to continue dancing as I get older as I do now. I started extremely late but I think if I keep working at it it will pay off. I hope that I am able to be self sufficient and do things for myself without any assistance because I have lots of assistance right now but I wont be living with my parents forever and I need to learn to sufficiently  care for myself. Lastly, I want to be happy and keeping positive thoughts no matter what I encounter.
Posted by Anonymous at 7:50 AM No comments:

Saving my own Life

Sometimes we may wonder why us? Why did I have to go through this? Why can't I have what others have? These are the questions that a year ago would be on my mind at least once a day. Why couldn't I see past these negatives in my life? I had so much to be grateful for and more. One day I learned how to save my own life, and how to stop being so negative. I learned that happiness is a choice and life is truly what you make of it. Once I came across this realization (which I should have come across earlier), I jumped at the opportunity to save ,myself from being so negative all the time and embracing life in all that it has to offer. O saved myself from myself by not comparing myself or asking the universe why things would happen to me; instead, I now accept things as they come, and I live a much more positive life style today.
Posted by Anonymous at 1:52 PM No comments:

A Letter to my 10 Year Old Self

You are just beginning middle school; don't worry about it, it will be extremely easy and fun, just make sure to stay out of trouble. 6th grade will be an extremely easy year; make sure to remember the equation for photosynthesis for Ms Parker's class. It will come back to haunt you in high school. Stop worrying about other people who don't worry about you; they don't matter, I promise. By the time you grow older you will realize this and none of these people will be in your life anymore. Also, don't rely on people for your happiness. It's not worth it. Understand that many of your current friends won't be your friends once high school comes around-- people will grow and change and that's just the way it works. Be nice to them now and everything, just know that you won't be as close in high school. Try new things. There are so many opportunities right at your feet-- take advantage of them! Oh, and one last thing; get a new pair of shoes.. please.

Love, your future self
Posted by Anonymous at 1:26 PM No comments:

The incident that happened with Harambe the gorilla who lived at Cincinnati Zoo shocked many people around the world thanks to a video that someone took of Harambe pulling a little boy around his enclosure before getting shot. It is unknown where the parents were at this time, but somehow he fell many feet down into the enclosure and Harambe found him and pulled him around. In the end, Harambe was shot so the little boy could live. This is a huge ethical argument that many people are going on and on about. 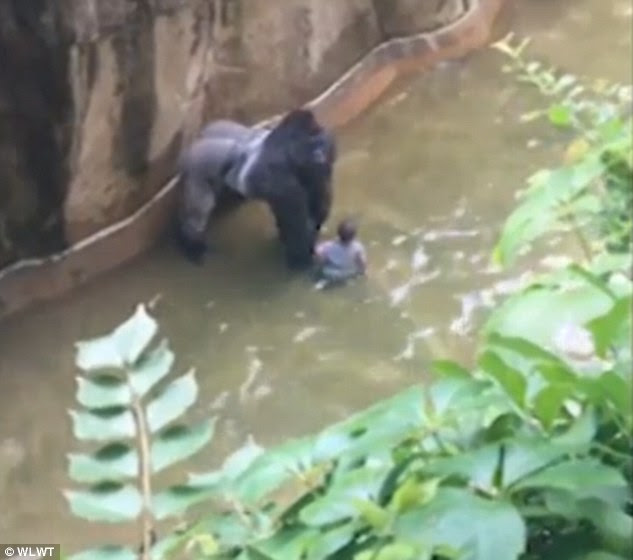 Some believe that shooting Harambe was the right thing to do; this is because Harambe was a huge gorilla that could have killed the little boy at any instant. One argument states that since many people were outside the enclosure screaming and freaking out, Harambe got stressed and did what gorillas sometimes do during times like this, which is choose something heavy and drag it around to prove to the other gorillas (in this case people) stressing them out that he is not afraid to hurt them and that he is strong. I see shooting as an ethical case from this viewpoint, but not from the next.

Others believe that shooting Harambe that was completely unethical, and that there could have been other methods. It is rumored that zookeepers tried to coax the gorillas to get into their cages, and all did except him, so that is why they shot him. Sources also claim that trying to use a tranquilizer would take too long and if it threatened him, he could have killed the little boy on the spot. The reason people believe the shooting was unethical despite this was because of the millions of slaughtered animals that many people eat daily never seem to phase anyone, but suddenly one gorilla is different? I am on this side, in that the killing of an animal is the killing of an animal, whether it be a 17 year old gorilla from the zoo or a 1 year old chicken in a slaughterhouse.

It should also be noted that this was an animal being kept in captivity, and that is already cruel on its own. Zoo's are nothing but big money machines that keep innocent animals in captivity for life.

Overall, from my opinion, the shooting of Harambe was cruel and it is just another act by the human race that highlights how evil we truly are.
Posted by Anonymous at 2:53 PM No comments: