Kesha is a singer-songwriter who faced a court trial that payed a huge toll on the future of her career. Last Friday, she lost a court battle against her producer Dr.Luke and Sony on alleged rape charges. Dr.Luke filed counter suit, and stating that Kesha made up the stories to get an "exclusive contract" with him.


This is another example of how women in society are seen as inferior to men. For example, singer-songwriter Chris Brown has been charged with two felonies after beating singer-songwriter Rihanna in 2009 and is still able to hold a career, while Kesha is being raped and is told that she is lying about it and is forced to still produce music with the rapist, Dr.Luke.

In today's society, women are encouraged to speak up about situations like Kesha's, only to be shot down and given blame for the whole thing. Affinity Magazine calls it "A ruling built on victim blaming".

The judge claims that "There has been no showing of irreparable harm, she's being given opportunity to record."

Today, the internet is full of support for the artisit by spreading hashtags such as #FreeKesha and #SonySupportsRape.
Posted by Anonymous at 10:23 AM No comments:

Animal abuse is inflicted cruelty to any non-human animal (excluding self-defense or survival). In extreme instances, beatings and lashings may be present, resulting in death. In other instances, it is simply the lack of proper care for an animal. Lack of proper care for an animal is overlooked by many people, and chances are, if you had a fish or a hamster as a child, you unintentionally abused it. Small fish bowls for goldfish, as an example, is considered animal abuse. This is because goldfish grow very large in the wild, so when stuck in a one gallon bowl as a permanent habitat, their organs grow too big for their body, resulting in death of the fish on average after 5 years of purchase, while a normal lifespan of goldfish is typically 20 years. As with hamsters, the same instance of leaving them in a small cage is similar. In addition, many other owners with no knowledge of these pocket pets do things such as wash their hamster and provide a metal wire wheel. In today's world, this is considered animal abuse-- and not many people are aware of that.
This is not to take away from the one million deaths of animals who are beaten every year, but this is to act as a wake up call  to make the general population more aware that there is more to animal abuse that beating them to death.


A now well-known case of animal abuse is the killer whales at Sea World, who reside for life in enclosures too small to be sufficient for them, and many of the whales have injuries due to this treatment. No one is physically harming the whales every day, but the neglect of proper care is harming them drastically. 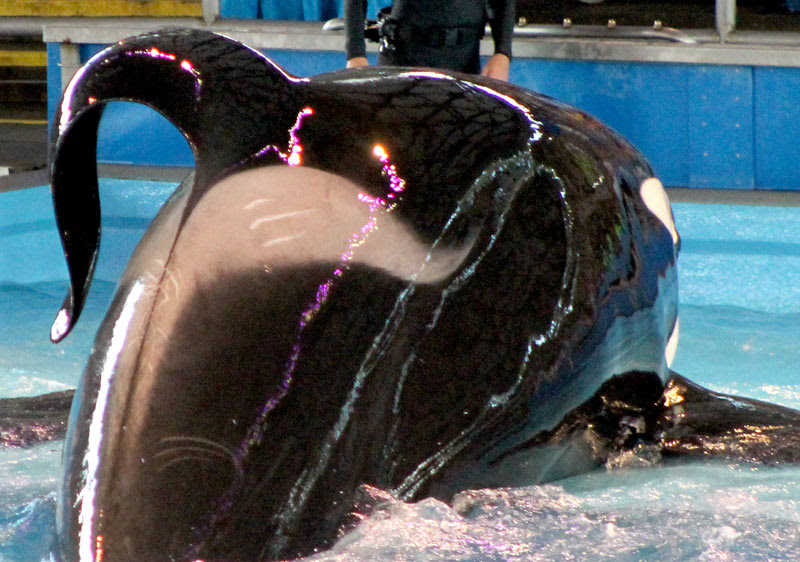 How can you help stop animal abuse in the U.S. without paying $20 a month to some TV ad? One way is to get the facts about whatever animal you hope to buy or adopt to provide the most enriching life to your pet. If you can't afford the necessary equiptment to keep your pet happy and healthy? Simply don't buy one.
Posted by Anonymous at 10:12 AM No comments: