Donald Trump: Justifiable or a Joke?

Potential future president of our country, Donald Trump, has made a name for himself since the election season has begun. Claiming to implement questionable things during his presidency if elected such as a wall to prevent illegal immigration and bans on Muslims entering the U.S. under the federal Immigration and Nationality Act “Whenever the president finds that the entry of any aliens or of any class of aliens into the United States would be detrimental to the interests of the United States, he may by proclamation, and for such period as he deems necessary, suspend the entry of all aliens or any class of aliens,”  Drastic and exaggerated measures have made him very dear to some and a poisonous name to others.

He has said crazy things about the women of our country, and when corrected by a Fox News reporter, he stated that he does not "have time for total political correctness." His sexualization of women is to be accounted for when considering who to vote for.

Trump does not have the mentality to run this country. The only way he can run this country is into the ground. Some argue he has similar characteristics to Adolf Hitler when he was elected chancellor of Germany, and the way Germany ended up was disgraceful. To some that comparison may seem exaggerated-- but is it really? 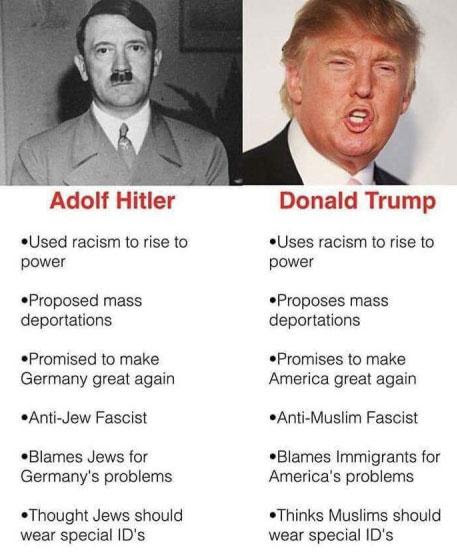 So the question lingers-- justifiable or a joke? Based on the claims made here and many, many more made by others, Donald Trump is nothing more than a joke.

Posted by Anonymous at 1:20 PM No comments:

On Recent Tragedy and Public Outcry
The current media will allow for the shot heard 'round the world to stop being that at the end of the block. Any street further and it’s the sound of patriotic fireworks. From a distance a sense of national pride is evoked and made present for others to feed off of.
I am not eased to see this: the red, white, and blue in the sky or that reversed. I am not eased to know that concealed within celebration there is the mirthful murder of people who now walk with no concern for borders of state.
Once in this nation there were outspoken actors, evil actors, red actors and peace seeking actors. Somehow these actors were synonymous with one another. The idea of who the enemies are is misshapen and twisted. Due to our natural blindness, our inability to think, our inclination to ignore, we can not stop the real enemy.
The spies are everywhere and they are in American banks, American restaurants, American theaters, and especially in American newsrooms. They are American. They are Russian. They are German, British and Spanish. They are French too. They are the viewers. They are from every country. They are people.


I now realize that we are getting in the way of ourselves. To my dearest friend to be from the other side of the world, you have my sincerest apology.
Posted by Anonymous at 10:30 AM No comments:

The Apple Watch- Is it Really Worth Your Money?

The Apple Watch was released on April 10, 2015 and the hype for the new technology had many anticipating the arrival of their watch months before it's release. Many people sport this watch around today in 2016, but for some the question is "Is this watch really worth the money?"

Lots of people who get the watch and become disappointed forget that the watch is (for now) only an extension of the iPhone, meaning it can't do any more than tell time without being paired to another Apple device. The watch relies on the phone for app functionality and WiFi sync. Other functions such as the fitness tracker also work best when the iPhone is nearby.

So, what are the pros of the Apple watch? For starters, the watch is great for people who are exercising or are trying to get in more exercise into their daily schedule. The watch when worn will calculate real time steps, amount of time standing, and even the amount of stairs climbed. The feature also will notify the wearer with a "buzz" vibration whenever they have been sitting down for a long time as a reminder to stand up and stretch.

Another pro could be the maps feature, which turns the GPS in the palm of your hands to a GPS on your wrist- which could be more convenient. In addition, users can view and reply to e-mails, texts, and check social media applications such as Instagram and Twitter.

The cons of the watch are that as stated the Apple watch struggles without an iPhone. In addition, even with an iPhone apps take longer to load on the watch because the information has to move from the iPhone to the watch, and for most people it may just be easier to pull their iPhone out of their pocket. Also, notifications can be cleared from the watch it will also disappear  from the phone, but it does not work the other way around. Lastly, lots of third party apps that you may use frequently use on your iPhone may not be Apple watch compatible, so you still have to use your phone to see those apps.

Overall, it is not a necessity for anyone with an iPhone yet, despite some conveniences of it. Many other things are good/bad with the Apple watch that are not listed here, as expected, but if you are looking desperately for a smart watch, the Apple watch is the best on the market to this day.
Posted by Anonymous at 2:10 PM No comments: